What does it mean for an abuser to be held accountable? What does justice for a survivor look like? And how do we get there? 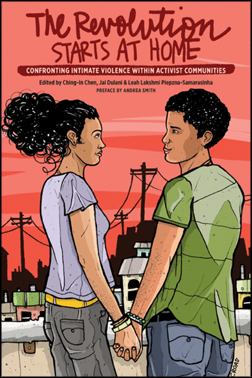 I’ve been studying domestic violence murders for the past 7 years and have seen time and again how the legal system is profoundly limited in its ability to provide justice, safety, or healing for survivors of abuse. But focusing on the failures of the police and courts can feel hopeless, because it is not clear where else to turn. I envision that our own communities can step up to confront abusers and support survivors. Yet it is hard to imagine communities where sexism, homophobia, isolation, and victim blaming don’t get in the way.

A new book, The Revolution Starts at Home: Confronting Intimate Violence Within Activist Communities, is a collection of stories from people who have also wrestled with these questions. The authors are activists working against racism and homophobia. It makes sense that the people trying to figure out how to hold abusers accountable within their own communities are those that have been the least served and most harmed by the criminal response to abuse—LBGTQ folk, people of color, immigrants.

The stories bring to life both the hope and promise of community solutions to domestic and sexual violence, and how painfully difficult this process can look on the ground. In one essay, a grassroots activist group describes how they organized to address abuse by one community member toward another. Their process had all the key ingredients for justice: a focus on the survivor’s safety and healing, treating the abuser with respect while demanding real change, and directly confronting the conditions that allowed the abuse in the first place. And yet, their efforts took years, required massive energy and commitment, and they found it was hard to know whether they were making real change.

Reading this book left me feeling both excited about the creative work being done and overwhelmed with the work left to do. The efforts, aspirations, and even failures in these stories felt like a call to action for all of us working to end domestic violence. As Andrea Smith says in the introduction, “the question is not whether a survivor should call the police, but rather why have we given survivors no other option but to call the police?”

3 thoughts on “The Revolution Starts at Home”