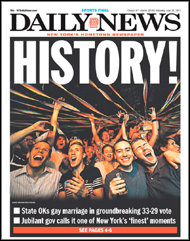 Last month, I celebrated along with 53% of Americans when New York became the 6th state to legalize gay marriage. But while I cheered the happy gay couples, another part of my brain is ambivalent about the victory. After all, the institution of marriage has a sordid history—from sexist wedding rituals to cultural and legal ties that keep women trapped with abusers. And getting married means more housework for women and less for men.

At the same time, marriage brings benefits that LGBT folks have been denied. And full access to marriage (and divorce) removes one strand from the web of homophobia, sexism, and racism that batterers can use to control their partners. For example:

Right wing rhetoric claims that the mere act of gay couples saying “I do” is enough to upend the institution of marriage. If only radical social change was that simple! I’m rooting for a day when we achieve marriage equality and much more—economic justice for women; healthy, equitable relationships for everyone; and public policies that support all families, married or not.

5 thoughts on “The gay agenda”