This week falls between the Jewish holidays of Rosh Hashanah and Yom Kippur.  This time of year in the Jewish calendar is focused on renewal, repair, and justice. Drop into any synagogue this week and you’re likely to hear a call to work for “tikkun olam” – a value often translated as “repair of the world” and used to invoke a broad array of social justice work. 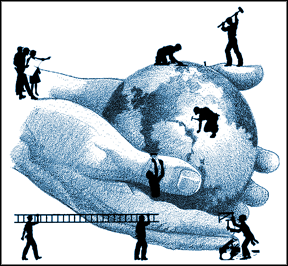 I learned something new recently about the origins of the idea of tikkun olam.  One of the earliest uses of the phrase in rabbinic literature is from the 2nd century C.E. These rabbis were addressing a loophole in traditional divorce law that was a threat to women. Occasionally a man would serve his wife with divorce papers, and then rescind the divorce without her knowledge. If she went on to marry someone else, the second marriage would be illegitimate, jeopardizing her legal status and the status of any children of that marriage. The ancient rabbis ruled that a man could not cancel a divorce once the decree had been delivered to his wife, and cited tikkun olam as the reason for the change.  They recognized that this misuse of civil law – though technically legal – threatened the integrity of the system as a whole.

I was astounded at how much this nearly two thousand-year-old legal issue sounds like stories we hear from advocates today. Abusive men are still finding ways to manipulate the legal system to punish their ex-wives. Children suffer when they are used as tools to control their mother. Women are not getting “renewal, repair, and justice” in court.

These are problems that seem as intractable today as ever. Yet our challenge is to continue to bring new energy, creativity, and passion to fixing them.  Where do you get the inspiration to find new ways to right ancient wrongs?