Like many kids, my son likes to dress up. He has a special fondness for very tight-fitting clothes. For example, he yearns for a wrestling singlet. I think his fashion sense is quirky, imaginative, and overflowing with childish joy—as it should be.

So I was not the least bit worried when my son developed a fascination with my sports bra and decided to fashion one for himself out of a cut up pair of boxer briefs. In fact, I was quite in awe of his intuitive skill at working the fabric. 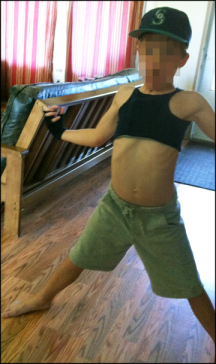 He was so darn happy about his new “sports bro,” that I didn’t even bat an eye the next morning when he chose to wear it under his t-shirt. We did have a short chat on the way to school about the fact that some of the kids might find it unusual, and did he have a plan for what he would say if anyone asked him about it? He confidently and enthusiastically replied, “I’ll just tell ‘em it’s my awesome sports bro!”

Forward to that night, when I found out my husband was very worried and strongly believed that our son should not wear it to school. He wasn’t constitutionally opposed to boys wearing anything that resembled “girl” clothing. He wasn’t second-guessing what this meant for our son’s gender identity or sexual orientation. But he was terrified that other kids—and especially their parents—would make those assumptions about our son, and that our son would face terrible teasing and bullying.

I was not bullied as a kid. I definitely wasn’t part of the popular crowd—anyone who knows me now will not be surprised to learn that I was a solid member of the dork crew—but I wasn’t teased or bullied. My son has such a solid self-assurance that I am usually more worried about making sure he is paying attention to other people’s feelings. So it never occurred to me to fear for him and the sports bro.

But my husband WAS bullied and teased growing up—terribly so—and those memories have stayed with him. He knows intimately how life-altering it can be to get teased for how you look or dress.

We did not arrive at agreement about how to handle this. I felt very strongly that we need to live in a world where our son can wear a sports bro and not have it be a big deal. My husband felt just as strongly that we do not yet live in that kind of world, and he was very unwilling to put our young son forward as the trailblazer. We are both coming at it from a place of love. And I think we’re both right.

At the end of the day, the only thing I could really think was, “Sexism and homophobia ruins everything!!”

And that is also true. Sexism and homophobia ruins everything.