It is inconceivable to me to go without a book. On my list this year: Zippy by Haven Kimmel, which I borrowed from my library and devoured in a few laugh-out-loud sessions. Truly a funny, poignant tale.

A particularly explosive guffaw of relief flew out of me as Kimmel recalled a violent episode in her childhood home when things could have gone terribly wrong, but didn’t. Her dad did not beat up her mother. She writes:

Mom told me, when I was old enough to ask, that she had learned the lesson from Mom Mary, Dad’s mother, who took her future daughter-in-law aside and told her that a woman has got to make herself absolutely clear, and early on. In Mom Mary’s own case, she waited until she and my grandfather Anthel were just home from their honeymoon, and then sat him down and told him this: “Honey, I know you like to take a drink, and that’s all right, but be forewarned that I ain’t your maid and I ain’t your punching-bag, and if you ever raise your hand to me you’d best kill me. Because otherwise, I’ll wait till you’re asleep; sew you into the bed; and beat you to death with a frying pan.” Until he died, I am told, my grandfather was a gentle man.

It reminded me of Mette’s mom’s theory about ending domestic violence—that women just need to get scarier than men. I asked Mette to ask her mother if it would be okay to share her theory. Her mom replied “Hell, yes. And I might add, I would be happy to teach classes on how to be scarier than anyone!”

In reality, there is nobody less scary than Mette’s mom Cindy. Though I have never given her cause to be fierce with me, I do believe she has that capacity.

And hence to the point. Fierce is different from scary. 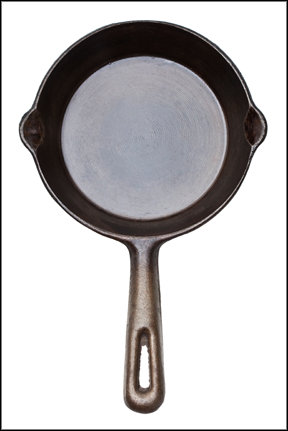 I mean, I really do not want to be reduced to simply scary—to beating my chest louder and harder than the primate squatting next to me.

But to warn someone off with a metaphorical frying pan—with a “Don’t you dare disrespect or threaten me or our children”—is the essence of the fierceness Cindy could give lessons about.

Historically, we have turned to the police, courts, and prisons—institutions designed to simply scare people—to deal with domestic and sexual violence. It hasn’t worked.

A smattering of people are coming up with different approaches. Ideas for engaging men coming out of prison, using technology so abusive dads can have safe contact with their kids, and creating alternatives for batterers to seek help themselves, before police and courts get involved.

I am feeling very optimistic that we are on the cusp of making an evolutionary leap—from scary to fierce. From having only fear-based approaches that at best impose an unstable peace, to becoming resolutely fierce in defending the foundational worth and dignity of women and children. It’s time.