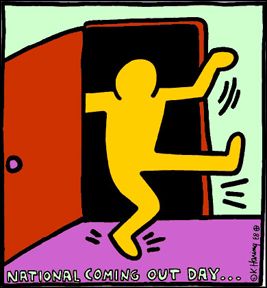 Perhaps in this age of increasing support for gay rights, marriage equality laws, and the oh-so-popular Ellen, it doesn’t feel like there’s much of a need for this day anymore.

But it is needed.

We talk a lot about community and relationships here, on this blog and in the work we do throughout the state. Part of what makes a relationship healthy is integrity, right? If you’re not able to be your full, honest self due to safety concerns or worries about being cast out of your community, what kind of relationship is that? Not much of one, in my book.

Being out actually relates quite intimately to domestic violence. Abusers will often use sexuality and gender identity against their partners and threaten to out them to their families or employers. This is particularly the case for trans women and men: someone who has transitioned may not have told their employers about their past (partly because it’s really none of their business, but also because they may be fired because of it). Additionally, abusers may use their partner’s identity as a way to belittle and humiliate them (“you’re not a ‘real’ woman, no one else would ever want you” or “I know you’ll just leave me for a man”).

When you consider the disproportionately higher rate of unemployment AND higher rates of domestic violence (and all other forms of violence) for trans folks, particularly trans women (and even more particularly, trans women of color), you can see how this would make someone feel trapped in an abusive relationship.

Although the reality is that some people need to remain closeted for their own safety, coming out is still a powerful, vulnerable, and important act. Coming out helps put a human face on issues like  homophobia and transphobia. Coming out helps create a domino effect, allowing more and more people to be an integrated, authentic part of their communities.

One thought on “It’s National Coming Out Day!”