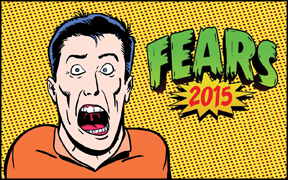 I am not typically drawn to sensationalist articles titled “What Are You Afraid Of?” Mostly, because I already know.

But when Parade Magazine fell out of the Sunday paper last week, there was a cool cartoon on the cover so I flipped to the article.

Here are a few of the things you should and should not fear in 2015:

Heart disease not Mercury in fish

Not getting enough dietary fiber not gluten

The re-appearance of measles, whooping cough, and other preventable diseases not vaccine side effects

Texting while driving not air travel…”

Note that domestic violence is number two on what we should actually fear.

Long before we feared flying in airplanes, long before airplanes, it served us to be afraid—of other animals that might eat us, things that go bump in the night, impending hunger or thirst. All this surviving through the millennia has landed us here—as beings with hyper-reactive fear centers in our brains that override rational thought.

But we humans are fortunate to also have lots of brain architecture dedicated to rational thought. This gives us access to things like ideas about what is right and wrong. About the differences between healthy and unhealthy relationships. And about how to survive domestic violence or stop perpetrating it.

I’d like to suggest an alternative to the fear framework that recognizes the wide open spaces of the fully evolved human brain. How about…

Use your gigantic pre-frontal cortex to:

Outsmart sexism instead of fearing that violence against women is inevitable

Think, plan, and act instead of fearing that nothing can be done.

One thought on “Fear not, think this”