When the video was released of Rutgers basketball coach Mike Rice hurling vile epithets at his players and roughing them up during practice, the public outrage was swift and nearly unanimous.  Sports reporters, athletes, public officials piled on: “frightening,” “medieval”, “unacceptable.”

This should all be reassuring—evidence of our collective intolerance for bullying. But instead, the condemnation left me disoriented. I turned on the news one morning to find out misogyny and homophobia are off-limits in sports culture. What planet am I on? 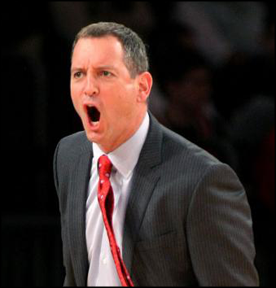 The fact is we live in two parallel universes. In one, the kind of abuse that Rice dished out is run of the mill. Common, if not condoned. It has its defenders: those who insist that boys need toughening up, and only naive liberals are shocked by coaches using slurs like “c*nts” and “f***ing f*ggots” to motivate their players.

In the other universe, coaches are expected to be upstanding role models, community leaders, molders of virtuous young men. In this world, we are shocked and horrified that such a person would abuse his authority. It is hard to understand why the players didn’t speak up or fight back. We hear a question familiar to any domestic violence survivor: why didn’t they just leave?

Rice’s coaching techniques weren’t exactly a secret before the infamous “highlight reel” of abuse became public. Lots of people attended practices where he belittled his players. University officials had already seen the video that was later leaked. Rice’s sideline rants during games were nationally televised. I have a hard time believing anyone familiar with competitive sports was truly shocked.

Maybe what’s going on here is that we have had a culture shift, but that shift has not yet taken root in the locker room. Maybe most people these days really believe that using humiliation and homophobia to attack players is unacceptable and damaging. Maybe it’s only a matter of time before Rice’s style of “coaching” is truly rare, not just rarely captured on tape.

Or maybe we just want it both ways. Winners at any cost, as long as the cost stays hidden.