Someone asked me if the current national conversation about sexual assault is helping our organization with increased interest or support. The answer is, not really. And I think the reason is that it’s hard for human beings to connect individual responsibility with community responsibility.

Often, I get supportive comments when I say that I am employed at a non-profit that works to prevent domestic violence. The term “domestic violence” can have different meanings; but usually people tell me that they believe that violence is rooted in individual behavior and poor choices. They don’t see what I see―that preventing violence requires, in part, government policies that support safe, affordable, accessible housing, child care subsidies and a livable wage for everyone. I guess it all sounds too impersonal and far away from daily life. And, yet, it matters. And it follows then that who is on the Supreme Court matters also. And who is in charge of Health & Human Services. If how you treat people does matter, than our leaders’ behavior and ideas matter.

I hear people say it is hard to vote at all with two imperfect presidential candidates. But this election reminds me of the importance of voting. People who came before me literally died for my right to vote. And, the right to vote is facing increased restrictions across our nation. Maybe your ability to vote isn’t restricted, but it could be happening to someone else in your community.

This October is Domestic Violence ACTION Month. Having a conversation with my children about the potential for abuse happening to them or their friends can be overwhelming. But, just like with voting, doing nothing is the worst choice. It is always harder to make things better after the worst happens. Exercising your right to vote and starting a conversation with your children about domestic violence are actions that matter. Your actions can be part of preventing more bad things happening and creating a world we all want to live in.

And it’s diapers. Or more specifically what happens when parents can’t afford to buy them. In case you don’t have young children, you might not realize how much diapers cost (up to $1000 a year)! Yikes. That’s a big percentage of someone’s income if they are making $20,000 a year or less. But that’s not the kicker. Many childcare facilities won’t let you leave your child if you cannot provide an adequate supply of diapers. And if you don’t have childcare, you can’t go to work. For parents in low wage jobs, they often have to choose between diapers or food in order to get their kids off to daycare and themselves to work.

Babies are gonna poop, so lawmakers in California proposed a bill that would give families on public assistance money for diapers. Because you can’t buy diapers with food stamps (they are considered a “luxury” item like booze and cigarettes).

It remains to be seen if this California bill passes, but I think it’s great to see this issue being talked about. A friend of mine is grouchy that they are talking about such a small change, when we really should be talking about the big problem of poverty and exploring big solutions. And he’s not wrong. But I’m excited about the potential for this to spark bigger conversations. Addressing poverty and barriers to work are critical to people being abused. Having money gives women more choices about their relationships. If talking about diapers is the window that opens our eyes to the bigger issues of poverty, that’s fine with me. Diapers for all!

I’ve got a problem. My little girl needs to go to preschool next September and after weeks of research and help from fellow parent friends I’ve found one―ONE!―school in my neighborhood that I can afford that might work when pieced together with, literally, four other childcare options like drop-in daycare and kind friends. And only if I also rearrange my work schedule, which I’m super lucky to be able to do because I work part-time and have a very understanding supervisor. The number of balls in the air here are dizzying and just might crush me if they all drop.

But then I think about how much harder it could be. How on earth do single parents do this, or parents in a toxic relationship? My partner is loving and supportive, but I’m still the one doing all the research, comparing preschools, visiting the schools, and rearranging my schedule. The title of this Slate article sums up what so often happens: When childcare costs more than rent, women stay at home. Of course, even that is not an option for many families.

The issue of childcare has a huge impact on people in an abusive relationship. Having a job can be a literal life line for someone being abused. It means time during the day when you are not isolated and can build relationships with other people, and it means a paycheck. Money gives you options and the power to make your own decisions. No one who is trying to keep themselves and their children safe should have to struggle to find affordable childcare so that they can keep their job. That’s my hope for everyone.

You might have heard that Seattle schools didn’t start on time because the district and the teachers disagreed on several contract issues. So the teachers went on strike for our kids and our schools. As the mother of a first grader I’ve been scrambling to secure child care, but I support our teachers.

The thing that made this strike a bit unusual (as far as teacher strikes go) was the huge amount of support teachers received from parents and communities. I’m not talking about a handful of parents bringing brownies to the picket lines. I’m talking about district-wide grassroots organizing. Parents, students, and community members came out strong—they walked picket lines with teachers, held their own march, and kept teachers supplied with food, water, and that liquid sunshine known as coffee.

Neighborhoods with lots of support trekked across the city to places with less and provided food and supplies there. Neighborhood childcare collectives popped up. An organization started by a couple of parents called Soup for Teachers exploded on Facebook as the place for parents to not only organize lunches for teachers, but also a place for accurate and timely updates on how the negotiations were progressing.

So kids, let’s review what we’ve learned from this strike about community engagement:

Awesome! Guess what? Violence in our homes is also a pressing and important issue affecting all of us. How can we take what we’ve learned from the strike and apply it to supporting survivors, holding abusers accountable, and promoting healing for all?

“At present, our country needs women’s idealism and determination, perhaps more in politics than anywhere else.” – Shirley Chisholm 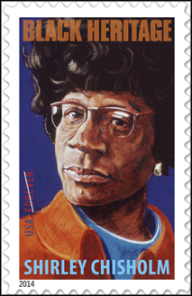 The late, great Shirley Chisholm was recently commemorated with a stamp, so I decided an in-person trip to the Post Office was in order. As I placed my order at the counter, the woman next to me asked who this Shirley Chisholm was. I’m always surprised at how few people seem to know about her. So I’m taking the opportunity to spread the word here.

It is often hard to wholeheartedly admire a politician, but Chisholm is one that I do. When I watched the 2005 documentary Chisholm ’72: Unbought and Unbossed, I was captivated by her dynamic presence and unwavering vision. As I learned more about her, I couldn’t help but wish that we had more politicians and leaders like her.

She represented New York’s 12th Congressional district for fourteen years, prioritizing issues of poverty, education, and women’s health and reproductive freedom. She deliberately hired women for all of her office positions, half of whom were black women. She was whip smart and had the ability to incisively cut to the heart of the matter; at the same time, she was also known for being warm and kind, with a great sense of humor.

Among her many notable accomplishments:

Good news! Word is that all that single mothers need to do to ensure that their children are happy, healthy, and successful is to get married. Wait…what? According to the New York Times, poverty is the result of marriage choices. Now come on, we’ve been here before. Several years ago there was a federal initiative that gave states funding for programs that promoted marriage to people on welfare. The goal was to move families off of welfare

and on to economic stability. These programs were by and large unsuccessful. Why? Because a man is not a financial plan. And what children need (besides the basics like love, full bellies, and a place to live) is parents who are respected, happy, and safe. Marriage is not the thing that will necessarily make this happen.

It’s myopic to conclude that children living in a home with two parents do better because of two paychecks. Yes, more income certainly makes it easier to afford the necessities, but (especially for moms who have been dealing with abusive relationships) marrying for an additional income just doesn’t seem like a wise choice. Let’s find some solutions that work for single moms and don’t insult their life choices. Let’s support funding for childcare, equal pay for women, and living wages for all. Fortunately, the New York Times also lets people like Katie Roiphe speak her mind: “The real menace to America’s children is not single mothers, or unmarried or gay parents, but an economy that stokes an unconscionable divide between the rich and the not rich.” Exactly!

I’ve said it before and I’ll say it again: access to money can protect women from abuse. A steady job offers not only income, but also protects against isolation, a powerful way abusers control their partners.

I’ve been thinking a lot lately about how workplaces support parents, probably because of my own preparation for baby #2 who is on her way. I am so fortunate to work for an organization that offers more leave than the law requires— some of it is even paid! This is a fantasy for many working moms-to-be. And yet, I still have to go back to work too soon and stress about both finding childcare and the financial burden that goes with it.

Imagine a place where new mothers (and often fathers) get ample paid leave when they have a baby, and childcare is available and affordable when it’s time to go back to work. Yeah, that place is called Germany, or Sweden, or Norway.  And while these are among the most generous places that offer paid leave, many countries throughout the world do.

The U.S. has recently been called out for our lack of support for mothers in the workplace. This is not good for any of us, but it especially affects those who are dealing with abuse in their relationships. Without enough paid leave, women risk losing their jobs, their income, their support network.

And parental leave isn’t the only factor. Paid sick leave and flexible work schedules have also been shown to benefit employers and employees alike and give critical help to those dealing with abuse. Let’s shift the way we think about jobs in this country and demand policies and practices that better support families.